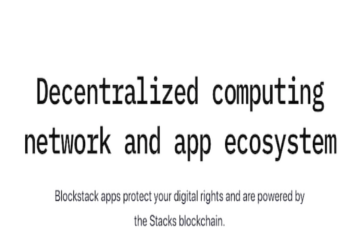 It never goes quiet in the world of cryptocurrency and computing in general. Remember a while back maybe 18 months the U.S. were trying to figure out a way of regulating cryptocurrency and the Securities & Exchange Commission (SEC) were trying to figure it all out? Well ladies and gentlemen I give you  Blockstack PBC, a decentralized computing network, it has just announced that it has raised $23 million in two of the first token offerings approved by the SEC.

In July, Blockstack made headlines by becoming the first company in history to be qualified by the U.S. Securities and Exchange Commision under Regulation A+ to conduct an initial offering involving cryptocurrency tokens. The raise is similar to its unregulated counterpart, the initial coin offering, which characterized late 2017. The firm was able to collect $15.5 million through the sale of 74.3 million Stacks (STX) tokens through its A+ offer in the U.S. and an additional $7.6 million through the sale of 30.6 million STX in Asia via Regulation S, according to a filing in the SEC’s EDGAR database.

“Our goals for working with regulators in the States were twofold. Primarily, we wanted to reach more retail investors who can be users of our network, and have a financial stake in the success of our ecosystem. Secondly, we identified Asia as a priority market, and our SEC qualification added weight to our strategic move toward Asia,” said Blockstack CEO Muneeb Ali in a statement.

More than 4,500 individuals and entities participated in Blockstack’s token offering in addition to the overseas investors, including Union Square Ventures, Lux Capital, Recruit Holdings, Arrington Capital, Hashkey Group, Fenbushi Capital, Frontier Ventures, Spartan Group, and other fund. The firm is also considering to raise an additional $5 million from a range of private investors in Asia, which will allow them to increase their presence in the continent.

“We are in discussions with international investors for an additional $5M+ which may be distributed in a separate private placement or in a follow-on SEC-qualified offering, as we have previously disclosed in our SEC filings. The goal of this additional distribution is to continue growing our community and network in Asia,” read the Blockstack’s announcement.  Blockstack plans to use the capital raised to grow its decentralized computing network by supporting user acquisition efforts, expanding into new territories, and hiring. The firm is also distributing up to $1 million worth of STX tokens to developers on a monthly basis to accelerate growth around the network. The company expects to distribute token to the participants of the ICO within the next 30 days and is working to list STX on foreign exchanges around October.

Anyone loves & protects individual liberty is Conservative, Republican or Libertarian; no matter their race: F. Douglas, Tubman, Wells: Dems went from enslaving Blacks to manipulating for votes; exterminating them via PParenthood & replacing with illegals!https://t.co/sUBzr2Fs7g